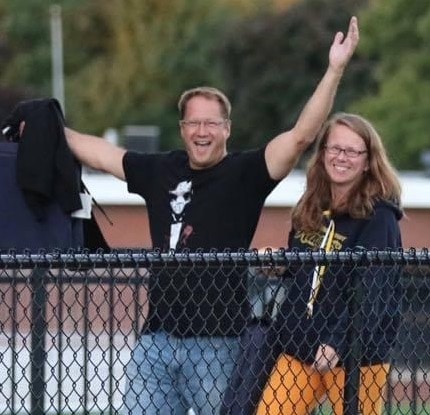 After just starting his fight with cancer he was unexpectedly taken down, like Hans Gruber in the Nakatomi building. He had a stroke and passed away days later on November 2nd. Not one to go quietly into the night, in his final days at home Cory insisted on being naked and giving the finger to friends as a farewell. The way he died is just like he lived: he wrote his own rules, said whatever would create the most discomfort and made himself laugh.

Most people thought he was crazy with his Halloween obsession, for the friends he associated with, for streaking at a Redneck Party, for marrying a redhead, and for the things he would say.  But Cory had a grin, a twinkle in his eye, a gravity of likability pulling everyone in, that made his behavior make sense.  It is that uniqueness that made everyone love him.

People knew hanging out with him would end in a night of rib splitting laughter and a head splitting hangover, but no distance was too great to travel to see him and no excuse worthy of missing the time with him.

Cory loved scary things, beer, good TV, racing, football, his dogs and being at the cottage with family and friends.  He also worked hard and was always willing to help a friend in need. Additionally, Cory found time to knock up his wife and father Spenser Doty, 22 and Carter Doty, 20.  He was so proud of his boys and enjoyed having the house full of them and their friends.

He was a rare combination of someone who had a love of life and a firm understanding of what was important. – the simplicity of living a life with those you love.  And he loved “most of you”.

Although he loved a good party and a night out on the town, sometimes he would trade it all for a night in front of the fire with his family and friends or day drinking and a nap on a Saturday afternoon. Cory’s regrets were…well, he had no regrets. That is how he lived.

Of all the people he touched (both willing and unwilling) his best decision was when he duct taped and kidnapped his eventual wife Kimberly.  Kim tolerated, enjoyed, bought into, and just accepted Cory from the day they met to his last day.  Kim and Cory had a special love for each other and were simply inseparable the last few months.

Beer companies and Halloween stores are financially devastated and saddened by the loss of Cory as well.

Cory asked specifically of Kim to have a “Celebration of Life” to be held this Spring/Summer sometime where there will be plenty of beverages and you will be asked to tell a “Cory Story”.

In lieu of flowers, pay off some of his bar tabs, apologize to someone he said “that Cory thing” to and promise, in his name, you will live your life as free and joyful and loving as he did.  Donations can also be sent to Verona Street Animal Shelter in Cory’s name if you so desire.