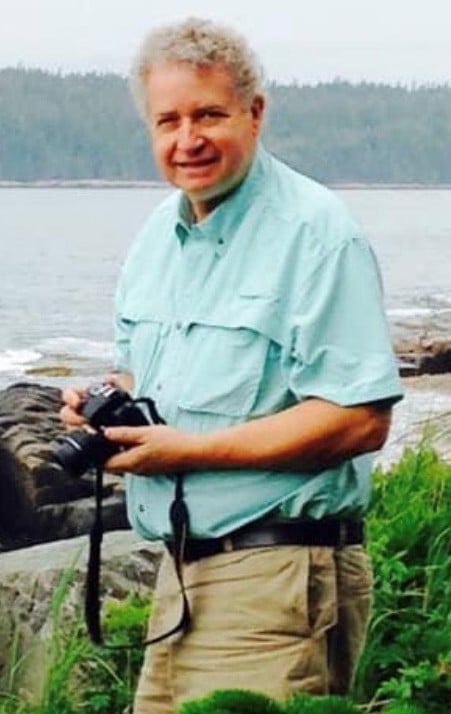 David Pistner died unexpectedly on September 23, 2021, far too soon for his beloved family and friends, who still needed him and depended on his being there, as he always had been.  He was a loving, thoughtful husband, father, son, son-in-law, adoring grandfather & uncle, a good brother, a dear & loyal friend, a caring teacher & coworker.  His life was centered around his family, especially his wife, Cassandra, his son, Kirk and his wife Kari, and his grandchildren, Lucas and Sophia who brought him great joy and happiness.

Dave was born in Tonawanda, New York, in November of 1952, the older son of Walter and Ann Pistner. He was born with a sunny disposition that could always bring a smile. Together with his older sister Linda and younger brother Tim, he enjoyed the kind of childhood where kids roamed their neighborhood on their bikes and looked for interesting things to investigate, and parents frequently directed them to “go outside and play.”

Dave graduated from Kenmore East Senior High in 1970 and went on to study education at SUNY Fredonia.  His college education was interrupted by the draft for the Vietnam War, which resulted in his joining the Army Reserve and attending basic training at Fort Jackson, SC.  Military service had a profound impact on Dave.  A gentle and kind man, at the end of his training he was made an offer he could not refuse: to become a drill sergeant.  His suitability for this job was based on his imposing six foot four-inch stature, aided by mirrored sunglasses and an unsmoked cigar.

When he returned to college he resumed his studies and graduated from Fredonia. He settled in Rochester, NY and pursued a career in teaching that lasted 36 years.  He was a gifted teacher and his students loved him. He was ever inventive, making up characters, stories and rhymes to help his students learn – all delivered with a fine dramatic flair and humor.  Dave was respected and loved by the teachers he worked with over his long career in the Greece Central School District; for many years he was chosen by his colleagues to be their building union representative. The majority of his time was spent teaching 1st and 2nd grade at Holmes Road Elementary.

Dave’s son Kirk was the pride and joy of his life.  The two of them enjoyed horseback riding, hiking, camping and fishing trips with friends in the Adirondacks. They loved animals and had many pets including 2 dogs, a cat, snake, parrot and a few little white rats.

In 2004 Dave found love and happiness with Cassandra King; the two of them eventually got married on the beach in Cape May, NJ. They enjoyed traveling to special places in the mountains or by the ocean. Dave made a second career of maintaining the back yard oasis of their home – getting the grass to grow along with keeping up the pond and the flower gardens. He was also a fabulous fix-it guy for his mother-in-law Toni, always happy to pop over when she needed help or something was broken.

More recently, Dave relished his new found role as grandfather. He enjoyed going to Luke’s soccer games, was interested in hearing about his video games or books he read and made it a point to always keep Luke’s favorite snacks and drinks on hand. He looked forward to Luke’s sleepovers and staying up late for long games of Monopoly, Life, or Risk.

After Sophia was born Dave cared for her during her early months when Kari had to return to work. Dave delighted in sharing pictures, audio clips and videos of her cuteness as she grew. He looked forward to the times when his grandchildren could come over, and relished merry-go-round rides, playing my little pony, feeding ducks, going on walks, playing hide and seek or chase me, stuffed animal vet, catching tadpoles or turtles in the pond, playdough cooking and visits to petting farms. He was always prepared with grilled cheese and tomato soup for Lucas or was ready to swing by McDonalds for chicken nuggets and lemonade for Sophia.

It must be said that Dave loved telling stories and laughing: no joke was too corny and he never met a pun he didn’t like—the worse, the better.  Dave was an avid reader, particularly of history.  In his retirement, his reading expanded to include a wider swath of history, biography, philosophy and current events. He had at least a hundred books downloaded on his kindle.

Dave was known for his kindness and willingness to help others.  Friends and family could count on Dave to lend a hand, a tool, or advice if asked.  Dave was the mainstay of his parents during their later years, tirelessly traveling to their home in Buffalo to keep things running.  His efforts allowed them to remain in the home they built together far longer than they otherwise would have.

The loss of such a man leaves a gaping hole in the lives he touched.  Dave’s family and friends have memories to sustain them, and the love they gave and received.  He will be dearly missed and lovingly remembered.

Dave Pistner is survived by his wife Cassandra King, his son Kirk and wife Kari, his grandchildren Lucas and Sophia, his sister Linda and her son Max, his brother Tim and his wife Margaret, their children Andrew and his wife Ali, and Alex and his wife Alexandra, as well as a number of aunts, uncles, cousins and many members of Cassandra’s family.

A private memorial service will be held on Saturday, Oct. 2, 2021. The family is planning a Celebration of Life for everyone at a later time, date to be determined.

If you would like to make a donation in Dave’s memory, he really loved spending time in the Adirondack Mountains. We suggest Protect The Adirondacks https://www.protectadks.org/