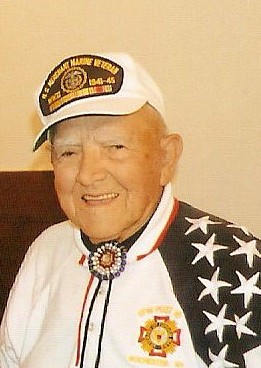 Al proudly served his country in WWII as a Merchant Marine and was also in the U.S. Army.  Al survived the Murmansk Runs and spent many hours in the ocean awaiting rescue during the war.  Al was injured during WWII and spent 10 months recuperating.

Al was a proud member of American Legion Post 330, VFW Post 16, DAV Chapter 15, and the Merchant Marine Armed Guards.  Al volunteered for many veteran’s events each year, he marched in parades, and distributed poppies up to age 89.  Al recently was able to go to Washington on the Honor Flight and was very proud of this event.  Al worked at Kodak for 31 years and retired in 1984.  Al stayed active his whole life and was always visiting friends and family, going to picnics, working out at the YMCA, taking trips, and was always on the look out for his next adventure.  Al will be remembered for his happy smile, his bolo ties and sharp outfits, his sweet giving nature, sense of humor, firm handshake, and his deep love for his country.  Al had a wonderful 90th birthday party this past summer with family and friends which brought him much happiness.

Donations in Al’s name may be made to the American Legion Ferris Goodridge Post 330, located at 691 Trimmer Road, Spencerport, NY 14559.