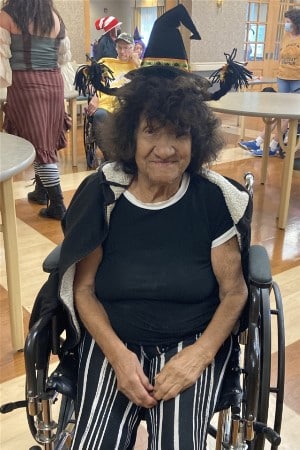 With much sadness, our family regrets to announce the passing of Frances Venus Walker on Wednesday, November 9th at 2:48 PM.

She is survived by her daughter Joni (Allan) Sandford; sons Richard (Barb) Walker, and Paul (Tracy) Walker; her grandchildren Erik, Adam, Amanda, & Heather; great-grandchildren Connor & Nolan; and several nieces and nephews. Fran was predeceased by her husband Donald Walker, and her loving brothers and sisters.

At the age of 99, our mom lived a wonderful long life and was still partying this last Halloween as seen in her picture. Her passion for life was quite evident over the years with many notable accomplishments and adventures. As a model, back in the ’50s, she was one of the original local “Jenny Girls”. Of course, she felt her family was her biggest accomplishment and was always volunteering from being a Brownie Leader, then later she started a committee of teens called the Southeast Teen Committee and set up a local teen club with a parish to provide a place for teens to hang out safely which was named “The Set”. She also helped arrange teen dances at several of the churches and Cobbs Hill. From there she became the manager of a band that some of the teens from the committee had started, and she helped them get paid jobs, and even went on as the manager of the band as it changed its members of the group as they evolved. Even during her early 90s, she was President of the homeowners association where she had lived. She will be sadly missed, but not forgotten!

The family will privately celebrate Fran’s life. To honor her wishes, no funeral or memorial service will be held. Instead, we know that Fran would like everyone that knew her to celebrate life with their families and remember her in those special moments you shared with her.

In Lieu of flowers please consider donating to the Lollypop Farm, The Humane Society of Greater Rochester in her honor, as she had a great love for animals.

The family would like to thank the staff at the Aaron Manor Nursing Home for their loving support and care of Fran during her stay there, especially during the final week of her life.