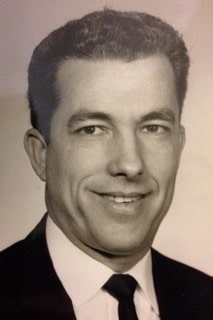 Irondequoit:  January 18, 1921-March 22, 2015.  This loving husband, father, grandfather, brother, uncle, and friend led a quintessential 20th century American life: from the great depression to WWII, from the boom of 50’s to the high-tech world of today. He was the brave solider, the Grand Poobah in the funny hat, the strong tenor voice at church, the ring leader to a circus of daughters… he was all of that and more. Hank, as friends called him, was born in Rochester to Celia and Henry Gardner in 1921. He was the older brother of Lee (deceased) and Carol (Kyle) and grew up on Rocket Street. He graduated from Aquinas in 1939 and enlisted in the service soon after. While attending Air Cadet School at Penn State, State College, PA, he met the love of his life, Josephine Tussey. He said it was love at first sight, he spotted her across a busy diner, turned to his friends and affirmed that she was the woman he was going to marry, he then walked over to her and asked if he could read the ‘funnies’ from her newspaper. They eloped in 1943 just before he was deployed to the Great War where he served several missions as a pilot in the Asian Pacific Theater. In 1945, he came home to his ‘Jo’ and their toddler daughter (the first of five!) to begin their life anew in Irondequoit. He graduated from the University of Rochester with a degree in Business Administration and spent his career at Kodak as an Industrial Engineer until he retired in 1983. He was very active at work and outside of work: he played violin and bass in several ensembles, including a Dixieland band; he made his own wine (although picking and crushing grapes was a family affair!); he was a talented illustrator and painter; and a sometimes actor when his daughters asked him to perform in school plays. Over the years, he was involved with several organizations including the Knights of Columbus, Toastmasters, Veterans of Foreign Wars, and American Legion. In his later years, he donated time to share his WWII experience with school children across the county and he participated in the Honor Flight. As busy as he was, his wife and family were his raison d’etre. He and Jo were always together, playing cards, golfing, cross-country skiing, square dancing, and enjoying their many friends.

He raised five smart and beautiful daughters: Margaret Dion (Joseph – deceased), Patricia Gardner, Kathleen Gardner (Terry – deceased), Bonnie Gardner (deceased), Mary Reinhardt (Chrys). He had the joy of seeing his 7 grandchildren grow up to have families of their own: Beth (Dion) Hoffman, Joe Dion (Nikki), Jennifer Young (Will), Jack Schwitz (Mickey), Kelly & Lee Reinhardt, and Claire Gardner (Cris). He also had the gift of 6 great-grand children (Henri, Regan, Liam Young, Michael & Grace Hoffman, and Matt Dion). His sister-in-law Margaret (Tussey) Hackett was dear to him. He loved and was loved by many more family members, friends, and special caregivers.

He will be deeply missed, most especially by his bride of 71 years, though we are all comforted by his long life and the legacy of family he leaves behind.

His Memorial Service will be held at 2:00pm on March 28th at The Chapel of the Good Shepherd, The Episcopal Church Home, 505 Mount. Hope Avenue, Rochester, NY 14620.