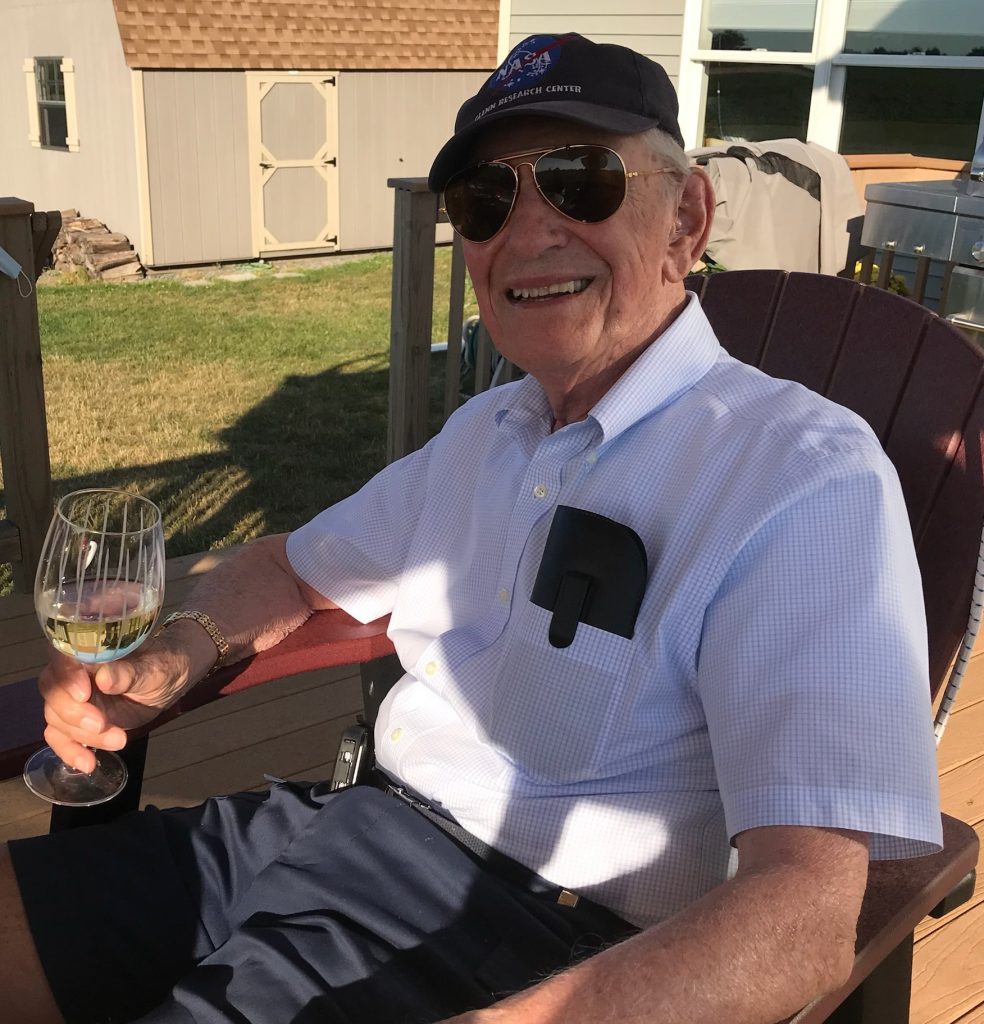 James (Jim) Frederick Scheible passed away peacefully on February 6, 2022 at the age of 93. He was surrounded by his loving wife Dorothy,  family members and the sounds of his favorite piano piece (Chopin’s D flat major Nocturne).

Jim was born on March 16, 1928 to Fred and Marie Scheible and grew up in West Irondequoit, NY with younger siblings David and Ann. Throughout childhood Jim enjoyed traveling around the U.S. with his family, including automobile trips to faraway states including Virginia and Texas. During WWII his parents bought an old farmhouse in Naples, NY. It was here that the family first started making wine and Jim and his siblings would work in the vineyard on the weekends. One of his earliest memories was the day George Eastman died, a figure whose legacy would influence his family for generations.

He earned a bachelor’s degree in Chemical Engineering in 1950 from the University of Rochester. During the Korean War he was drafted into the Army, was assigned as a photographer at the Army Chemical Corps School and rose to the rank of Corporal. One of his assignments was at the Nevada Test Site where he observed several nuclear weapons tests. Fortunately, he was far enough away from the blast site that his Geiger counter did not register dangerous levels of radiation. Decades later a VA study confirmed he suffered no adverse health effects.  In 2014 Jim went on an Honor Flight to Washington, D.C. which was a profoundly moving experience.

After his service, he returned to Rochester and married Dorothy Mulcahy on September 18, 1954. Dorothy describes them as “a perfect match.” They remained supportive of each other throughout their marriage and had many shared interests. They enjoyed doing everything together, including walking, bike riding, water aerobics, cross-country skiing, and even white-water rafting. Dorothy notes their shared love of classical music and how much they enjoyed going square dancing every week for many years. Their loving marriage was a great example to their four children: Mary Elaine (deceased), twins John (Diane) and Jeanne (deceased, Gary), and Barbara (Jerry). He was a devoted father and loved spending time with his children and remained close with them throughout his life.

He worked at Eastman Kodak in the Paper Service Division as a chemical engineer and eventually as a manager. While working there he completed an MBA at the University of Rochester. Both his father and son worked at Kodak, and together they combined for a continuous service of 96 years.

He served on both the local parochial and public-school PTAs. For decades after he retired, he was very active in the Service Corps of Retired Executives (SCORE), where he had the opportunity to mentor small business owners and entrepreneurs. He also greatly enjoyed going to monthly Kodak lunches to catch up with his other retired coworkers.

It would be difficult to fully describe Jim without acknowledging his lifelong love for dogs, which included owning three Shetland Sheepdogs.  His memories and stories of Chips, Pepper and Murf were heartfelt and usually hilarious.  This love was passed down to his children, and though they chose other breeds, his love for each of their dogs was undeniable.

He had four granddaughters: Meryl (Jock), Grace, Erin, and Jillian and always took an interest in their lives even though they lived far away. They all have fond memories of “Papa Jim” and how he gave the best hugs whenever they would visit him. They loved hearing him tell stories about his life (even if they had heard them before). Jim also had two great grandchildren, Ridge and Dawson. He cherished the time he got to spend with them and loved seeing their pictures and videos.

Jim had a wide range of interests and hobbies. At his house in Irondequoit, he cultivated a rose garden, pear trees, and many flowers. Every year he would make jelly and jam from the many fruit bushes in the side yard. He was also an avid bird watcher who could identify most birds. He was often seen with a camera around his neck and was the designated photographer at family events. Over the years he shot over two dozen reels of slides. Family slideshows were a staple of many family gatherings. Jim also loved to swim in the family pool and loved to display his many historical American flags around the perimeter. His flag collection was extensive, and he often went to events to speak about the history of the American flag. He was also a big music lover and would often play classical music through the speakers around the pool. He loved listening to his wife play the piano in their living room. He had a keen interest in aviation and astronomy and would always read the magazine “Science News.” Even in his last days in the hospital he would still use his iPhone to track the commercial airplanes flying overhead. His grandchildren remember him teaching them to identify different constellations, stars, and planets in the night sky.

Jim loved to travel and went on many international trips with his wife Dorothy. His favorite was a five-week trip they took to New Zealand in 1981. They also traveled to Germany, Austria, France, Liechtenstein, Switzerland, Israel, Costa Rica, Nicaragua, Canada and Ireland. Throughout the years he was able to travel extensively across the United States with his wife and children.

In 1984 Jim and Dorothy bought a second house in South Bristol, NY overlooking Canandaigua Lake. The house was affectionately named “Chatwo Scheible,” not to be confused with his parents’ Naples house, “Chateau Scheible.”  The couple spent many weekends there with friends and family. Over the years Jim made wine with his extended family using many different native and hybrid grape varietals. Happy hour with Scheible Champagne was a daily ritual with Jim and Dorothy. Friends and family have many fond memories of stopping by for a chat and a glass of wine.

Jim had a great sense of humor and took great joy in reciting jokes to his friends and family. He often got himself laughing so hard that he couldn’t get out the punchline. Every morning he loved to read the comic “Pickles” along with the New York Times. He was able to recite many poems and his family would often wonder how he managed to remember so many things!

Throughout his life, he was a man of faith.  His Catholic upbringing was apparent in his church attendance, prayer life and charitable giving.  In his last days, he prayed for himself and for his family, and mourned the loss of his second daughter Jeanne.  A call from his hospital bed to Jeanne to say goodbye in her last hour allowed her to pass away in peace.  It was also the final highlight of his long and remarkable life.

In lieu of flowers, the family requests a donation be made to Honor Flight Rochester. Visit https://honorflightrochester.org/donations/ or checks can be made out to:

A Celebration of Life for Jim and his daughter Jeanne will be held at a future date.