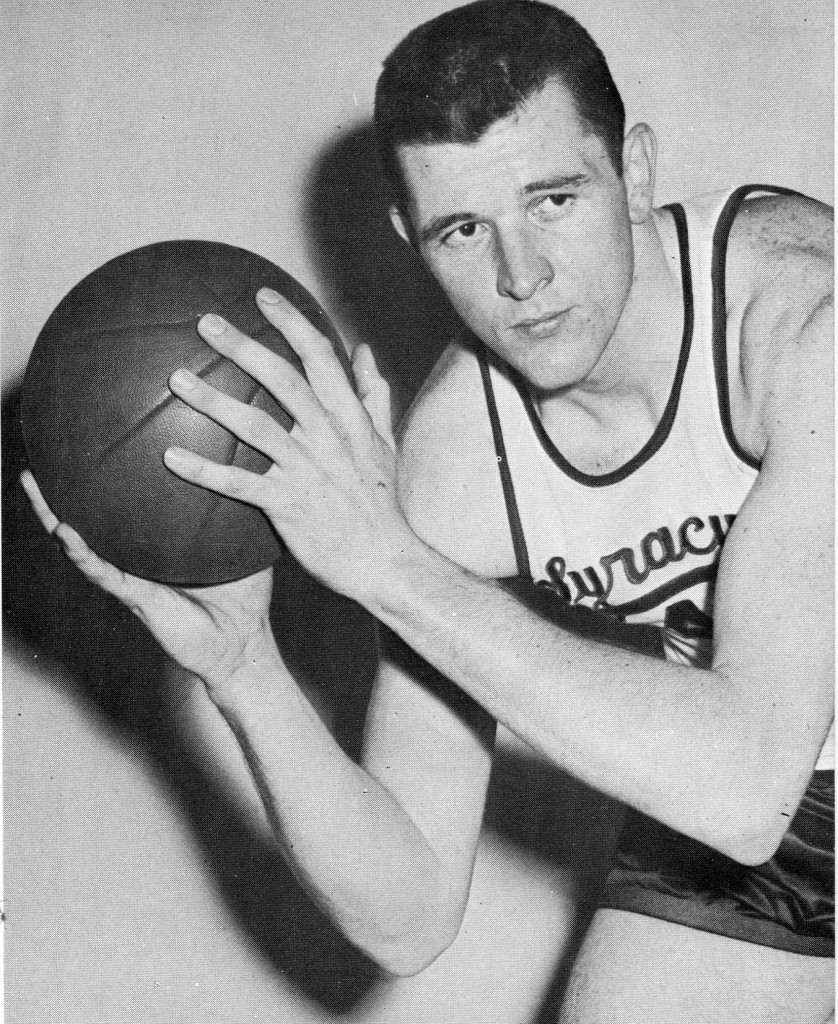 Irondequoit NY:  Husband, Father, Coach.  Jon Cincebeaux (Cincebox) was born in 1936 in Endicott NY and grew up in Binghamton, NY. He died peacefully at the Leo Center for Caring in Rochester, on October 28, 2016, at almost 80 years of age. Jon was the rock for his family, he will be sorely missed by all who knew him but his legacy lives on in his children, grandchildren, nieces and nephews, he loved them all so much.

Jon was pre–deceased by his parents Warren and Rowena Moore Cincebox. After genealogy research he changed his name to the original form. Survivors include his wife, Helene Baine, Syracuse U. cheerleader, also SU class of ’59 and his wife for 57 years; sons Charles Jon Cincebox, Syracuse NY, and Christopher Mark Cincebeaux, San Anselmo CA, his wife Jill Howry; grandchildren Emily, Madeline and Tyler; his sister Sandra Cincebox, Binghamton NY, and brother Thomas Cincebox, Horseheads, NY plus his five nieces and nephews: Cindy Doyle, Lori Caulfield, Cathi Klan, William and Tommy Cincebox and their children. In accord with Jon’s wishes, no ceremony was held but a Celebration of Life will take place in the spring for family and friends.

Handsome and charming Jon was often compared to Rock Hudson, they looked so much alike. He loved music – and loved to sing and most of all he loved sports, especially basketball. When he grew tall in junior high, eventually 6’7″, the coach recruited him for the JV team and he ended up starring for Binghamton Central H. S. on the Fabulous Five team of 1954-55 coached by super coach Art Sharpsteen.

Jon was recruited by Duke University and Syracuse. He decided to stay close to home and played on the Syracuse U. freshman basketball team his first year, as required back then, moving to the Varsity team as a sophomore. He starred on Syracuse U’s first NCAA Tournament team as a sophomore and was named honorable mention All American in his junior and senior years scoring over 1,000 points and 1,000 rebounds in his career, remarkable considering he played in only 79 games whereas Rony Seikaly who broke his record played in 129 games.

As a senior Jon was selected for the East All Star and North-South All Star teams. His rebounding record at Syracuse U. still stands 56 years later as he averaged 16.4 rebounds for a season, and 14.6 rebounds for his career. He ranked 5th in the country behind two Hall of Fame players Wilt Chamberlin and Oscar Robertson.

Jon found his wife at Syracuse U. It was a story book romance. Helene Baine had kept his picture from the high school All State basketball team and wished she could meet him. Hopes were raised when she was a freshman cheerleader at SU but she didn’t catch his eye until they were juniors when he asked one of the male cheerleaders to set up a date. She said no blind dates but when she heard who it was – bingo. They had their first date on Christmas Eve and Jon met both sides of her family. It was a good connection as the first three games that they dated Jon scored 29 points at each one! They shared fond memories of studying in the SU library, topped off with cheesecake on Marshall Street and visits to SU’s famed kissing bench. Jon graduated from Syracuse U. in 1959 with a B. S. in Sociology and Math.

Jon was drafted 21st in the NBA draft by the Syracuse Nationals. He played semi-pro basketball for the Tuck Tapers in New York for 2 years and then a year for the pro Pittsburgh Rens American Basketball League team with Hall of Famer Connie Hawkins. He continued to play with a broken nose but an errant elbow broke his jaw, ending his Pro career. Unlike the superstars who earn millions today, he earned the sum of $10,000 for the year which ceased when he became injured. A fond memory was a scrimmage against the Boston Celtics which the Rens won!

A memorable experience occurred when the team stopped for dinner at a restaurant in the Carolinas. Jon saw a sign on the door, “whites only” and it embarrassed him for his teammates so he stood in front blocking it as the team filed in. The owner called the police.  In a unique twist, Jon coached current SU coach Jim Boeheim in the Eastern League where Jim averaged 32 points a game for the Scranton Miners.

In 1979 Jon was awarded the prestigious Syracuse University alumni award, the Victor A. Hanson Medal of Excellence. This honor is given annually by the Syracuse University Hardwood Club to an individual who made outstanding contributions to college basketball. The award is named after Vic Hanson, the legendary basketball and football star for the Orangemen in the 1920s.

Jon had good memories of playing with Jim Brown as a sophomore on the Syracuse U. basketball team along with Vinnie Cohen and Manny Breland and was a good friend with Roosevelt Bouie, a Syracuse star center from Kendall NY. Jon was a counselor at Dolph Schayes summer basketball camps and recalled playing one-on-one with the basketball great.

Involved in sales for his working career, Jon re-located to Rochester NY in the mid 1960s and especially enjoyed conducting school fund raising with QSP, a subsidiary of Reader’s Digest. He liked motivating and challenging the students at many Rochester area schools from Aquinas to St. Joseph’s. He was inspired by QSP colleagues and best friends – John Jones of Virginia, Jerry Wingen of New England and Bill Howell, Rochester. A natural born coach, he led his son Chris’ 5th grade basketball team to a championship and coached Chuck’s baseball team to a perfect season.

Jon competed in the first Gus Macker Basketball Tournament in Rochester on a team with Charles Schiano and former SU player Pete Chudy – they won the championship. He later coached his niece Renee Walluk Burslem’s team to finish second in this event.

A few months after arriving in Rochester the Cincebeaux family moved to Chatham Gardens in the inner city shortly after the riots that took place there. It was the next best thing to the Peace Corps. The couple and their children took part in social and athletic events at the Baden Street Settlement House prior to moving to West Irondequoit a few years later.

Jon loved classic cars and had many beginning with a 57 yellow Chevy convertible with fins, to the 62 triple white TBird with a hard top that folded to make a convertible, a Lincoln Mark 8, a white Corvette and later a red one, a baby blue Mustang convertible he bought for his wife, and the showiest of all a yellow TR3 sports car.

He was an old movies buff, his hero was John Wayne and he especially enjoyed WWII battle films. He and his wife liked foreign films particularly ones from Korea and Japan.  Jon loved animals – from the chipmunks that entertained him in the garden to his big six-toed rescue cat, Mischief, and the doe who came to visit every day for her apple bringing her spotted fawns Bambi 1 and Bambi 2 along.

According to Jon’s wishes no ceremony was held but a Celebration of Life will take place in the spring for Jon’s extended family and friends.