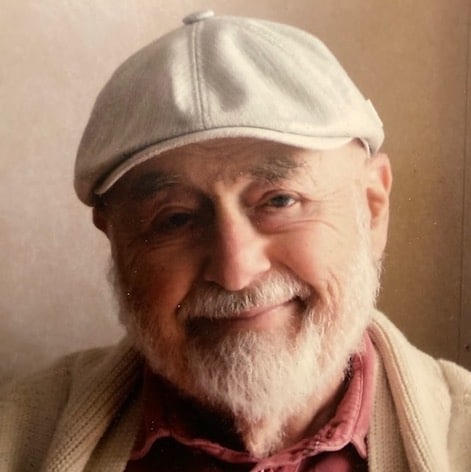 Joe – “The Dude” and “GD” (Grand Dude) as he was referred to by his family – was raised in The Bronx, NY by his parents, who had immigrated from Ukraine in the late 1920s. His childhood included playing stickball on the city streets with his best bud of over 80 years, George Wasserman, and enjoying his mom’s cooking. As a young adult, Joe was an NYC cab driver, where he honed the driving and navigation skills he would later pass on to his children.

He graduated from Inwood High School in 1945 and New York University in 1951 with a BA in Mathematics and Statistics. Soon after, while completing his Masters Degree at Columbia, Joe was drafted into the U.S. Army during the Korean War and was stationed in Frankfurt, Germany. He was honorably discharged in 1953 and, especially in his later years, took great pride in being a Veteran.

After returning to NYC, Joe began his illustrious career as an actuary at New York Life. In the 1960s, he relocated to Washington, DC to work for the Watson Wyatt Company. There, Joe researched and developed The Employee Retirement Income Security Act of 1974 (ERISA), a federal law that sets minimum standards for most voluntarily established retirement and health plans in private industry to provide protection for individuals in these plans. When someone was needed to head up the Central States Teamsters Union account, Joe was the guy – not only because he had the required job skills but also because he could mediate their meetings. In DC, Joe built a hard-working and fun-loving life entertaining friends in his Dupont Circle apartment and welcoming guests on “Sundance”, his boat in Annapolis.

In 1975, Joe met and instantly fell in love with Dalene, who ultimately relocated from NYC to Washington, DC to build a life with him. They were married in Briarcliff Manor, NY in 1977. Meredith and Matthew were born in 1979 and 1981, respectively. Joe was a dedicated husband and father, consistently instilling the values of family, intentionality and efficiency. Over the years, the Dean House became synonymous with The Hang Spot; he and Dalene opened their home not only to their own family, friends and children’s friends but also to exchange students, strangers, visitors and those in need. From parties to sleepovers to an open invitation to “stay as long as you need”, Joe was the steady, quiet host who showed his love through his cooking.

In 1992, Joe retired and spent his remaining years completely dedicated to family, health and pleasure. He refined his sensational cooking and baking skills, went on cross-country and international adventures and supported his children through adolescence and into young adulthood. Perhaps his favorite vacation was a cruise with Dalene to his homeland of Russia, his final international jaunt. Joe was deeply proud of his family, his home and his expertise in the kitchen. In retirement, Joe literally cooked and walked himself out of Diabetes, becoming healthier in his 60s, 70s and 80s than he ever had been. He doled out plenty of life advice and Joe Deanisms – “You’re a pain but you’re not transparent” –  from his post on the living room sofa, where he listened to WQXR and read The Washington Post cover to cover Every. Single. Day.

In 2009, Joe suffered a massive stroke. Against the odds, he recovered tremendously, with Dalene always at his side. Welcoming his first grandchild, Zoe, in 2010 brought Joe great joy. He delighted in holding, strolling and reading to them. After 35 years in their DC family home, Joe and Dalene moved back to NYC in 2016, where they settled in Brooklyn to be close to Meredith, Elijah, Zoe and Hunter, who was born the day they moved into their Lincoln Place apartment. He and Dalene doted on Hunter, Zoe and their adult children and while Joe wasn’t cooking anymore, he delighted in enjoying local bakeries and restaurants. Despite losing most of his vision by that time, Joe would occasionally make the nearly one-mile walk – with Dalene or flying solo – from their apartment to Meredith’s. In March 2020, Joe and Dalene temporarily relocated to Rochester, initially to ride out the early stages of the pandemic with Matt and Liz. Joe was thrilled by the reversal of roles he experienced when Matt cooked for and hosted him, stating how proud he was of the life his son built. After several months, Joe and Dalene decided to stay local and moved to The Villages at Unity, where Joe lived the final 18 months of his life.

Tenacious as ever, Joe insisted on making the daily half-mile trek to the dining room for dinner, hunkered down with a vision impairment machine for hours and hours trying to read books and welcomed daily calls from his family. He was as wildly in love with Dalene as ever, which he would proclaim to family and friends alike. Even in his final days in the hospital, Joe’s attention was on his family, always moving quickly through assuring them he was just fine so he could hear about how they were doing. Steady, generous and kind until his last moments, Joe’s final words were “I love you.”

In memoriam contributions may be made to WQXR: https://www.wqxr.org/  or Prevent Blindness: https://preventblindness.org/