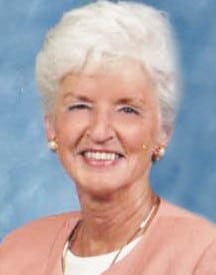 Rochester:  Died peacefully surrounded by her family March 7, 2015.  Loved by all, Mig was born November 29, 1927 in Ithaca NY, where she remained for most of her life.  She was the daughter of the late Edward and Norma (Rawley) Kramer. On July 14, 1951, she married Joseph D. Gallagher, and later became a loving, caring mother to four children.

She was the Ithaca Deputy County Clerk from 1982-1984, and later employed at the Cornell Laboratory of Ornithology.  She was a member of the Cayuga Medical Auxiliary Volunteer and a communicant of Immaculate Conception Church.

She is pre-deceased by her husbands, Joseph D. Gallagher Jr. and Russell D. Martin, and her sister, Monna (Kramer) Treadwell.

The family extends their heartfelt thanks to the Highland Hospital and Lifetime Care for their compassionate and loving care.  We came to include them as part of our family as we wished farewell to a woman of wit, wisdom, laughter and love.

A Memorial Service will be held later in the spring, notice to come or visit www.hersonwagnerfuneralhome.com for any updates.  The family has been assisted with arrangements by Herson Wagner Funeral Home, Immaculate Conception Church, and Rochester Cremation.