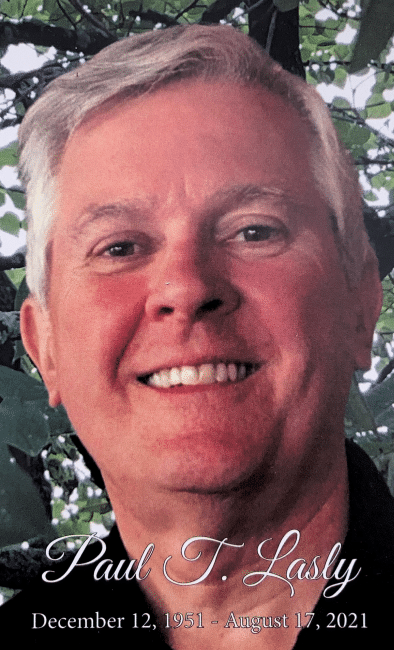 Paul was born on December 12, 1951, in buffalo, NY, the only child of Francis Lasly and Angeline Galenski Lasly.  Following high school, he attended Bryant and Stratton College earning an Associates Degree in Information Technology.  He was fortunate to gain early experience in this emerging industry and worked for over 42 years for various companies in Buffalo and Rochester.  In 2017, Paul retired from Wegmans Food Markets as Internal Audit Manager, Information Technology.

Paul enjoyed music and played the saxophone from the time he was a teenager, founding a band called The Buffalo Nu Tones.  The band played both popular music and Polish music at weddings and parties in Buffalo.  When he moved to Rochester, he joined the Eastman School Community Music Program’s New Horizons Band.  He continued saxophone lessons and performing with the band in and around Rochester.

Paul is predeceased by both parents and his first wife, Donna Marie Lasly.  He is survived by his Rochester family, wife Maureen DeMarco Lasly, stepdaughters Alison DeMarco (Andrew Penner) and Abigail Castle (James Castle), grandsons Jimmy and Johan DeMarco.  His Buffalo family includes Brian Lasly (Melissa Stamboulis) and Kurt Lasly (Jennifer Dunwoodie) and three grandchildren.  Paul is also survived by many cousins including Sharon Everett, who was like a sister

Burial took place at Whitehaven Memorial Park on September 2, 2021, which would have been Maureen and Paul’s 15th wedding anniversary.

Memorial contributions may be made to the charity of your choice or Brighton Volunteer Ambulance, 1551 S. Winton Road, Rochester, NY 14618