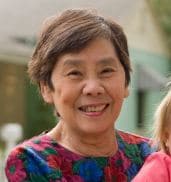 Pittsford, New York:  on February 12, 2014 peacefully at age 82. She was born in Saga, Japan to the late Renzaburo and Toshi Miyazaki on January 28, 1932.  She married Richard C. Johnson in 1961 and they lived together in Fukuoka and Tokyo, Japan before relocating to Lafayette, Indiana in 1964.  They moved to Scotia, New York in 1966 and raised three sons.  Yoshiko worked at the Navy Exchange in Glenville until retirement and then moved to Pittsford in 1999 to live closer to her oldest son Joseph.  She was a member of St. Louis Catholic Church, Pittsford Senior Citizens, and was involved in Japanese cultural events throughout her life.  She especially was fond of opera.

She was a devoted and loving mother and grandmother.  She will be missed by all who came in contact with her gentle spirit and beautiful smile.  Her family wishes to extend their gratitude for the loving care given to “Yoshi” by the staff at Glenmere Assisted Living Facility in Pittsford and by Touching Hearts Companion Service, especially China Phillips.  In lieu of flowers, contributions  may be made to VNS Hospice of Rochester.

Family and friends are invited to a celebration of Yoshiko’s life at The Gathering Room, at the Cloverwood Retirement Community, in Pittsford, Saturday, March 1, from 2-4PM.  Interment to be held at a later date at the Most Holy Redeemer Cemetery, Schenectady, New York.